This post is a TL;DR of Vitalik Buterin’s analysis of the meaning of the term ‚decentralization’. It is a great heuristics for analysing the architecture of various systems, including ‚social machines’, and so I’m leaving here a distilled version of the main categorization along with some comments relating it directly to the topic of blockchain-based ‚social machines’ 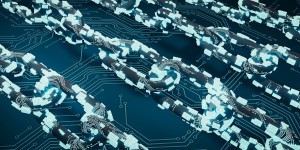 Vitalik proposes that there are three dimensions of decentralization:

One way you can use this categorization to think about real-life examples is to consider a provider of a blockchain-as-a-service, selling a cloud-based distributed ledger architecture to users or consortia of users. In this case, the architectural distribution of the system could be preserved; even though the service is cloud-based, the actual computers running nodes could be located in various physical data centers. The logical layer of the system would be centralized (eg. by state sharing, consensus algorithm), in accordance with general blockchain design principles

Political decentralization would be another matter though. The service provider ultimately controls system’s infrastructure on the physical level at least; it can turn it off anytime. Also, unless the client is given the opportunity to cryptographically secure their assets so that even the provider can’t read them, the provider would also have some sort of centralized control over system’s content and processes. This is in contrast to the way public blockchains work: in most cases there are no such centralization of political power over blockchain.

What is interesting about Vitalik’s categorization is that it goes beyond technical layer of blockchain. It acknowledges that off-chain governance, manifesting itself among other things through the degree of political centralization, is an important element of blockchain systems – their technical layer is wrapped by social layer, and only a part of it is regulated and encoded by on-chain model of human behaviour. In social machines, hybrid, human-technical systems, it is not just the technical component that controls the human; the opposite also takes place and the social ‚wetware’ critically influences the boundary condition of technical component.

Another interesting thing is that this conceptualization of centralization can be used to describe purely social systems (check the original publication for some examples). As a sociologist, it would be interesting to find out how compatible this categorization is with the existing, traditional ways of thinking about different kinds of societies and political systems.